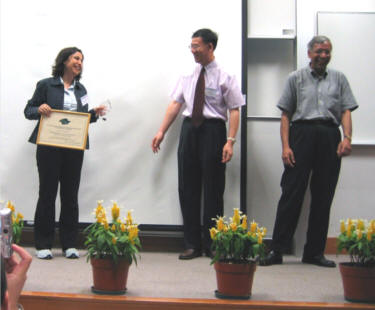 Prof. Berrin Yanikoglu & Dr. Alisher Kholmatov have won the first place at The First International Signature Verification Competition SVC 2004, organized  in conjunction with the First International Conference on Biometric Authentication (ICBA 2004). In Task 1 of this competition, they obtained 2.84% EER on skilled forgeries, while the 2nd place system got 4.37% EER. Interestingly, in Task 2 of the competition, where pen pressure information was also available, their system was again the winner with 2.89% EER without using the pressure information, while the second place system got 5.01% EER on skilled forgeries.

The system developed by Prof. Berrin Yanikoglu & Dr. Alisher Kholmatov obtained the lowest error in the skilled forgery test of the Biosecure Evaluation Campaign 2009 ,when tested for the "mobility conditions". The purpose of this test was to observe the effects of lower quality signature acquisition conditions on system performance; so reference signatures were collected with a tablet (DS2 database), while query signatures were collected with a PDA (DS3 database). The system obtained about 2.98% EER when tested with skilled signatures collected on the same platform as reference signatures (tablet) and 4.99% EER when tested with signatures collected on the PDA (mobility condition). The results can be found here.

The offline signature verification system developed by Prof. Yanikoglu, Dr. Kholmatov and PhD students (B. Yilmaz and C. Tirkaz) was the winner of the 4NSIGCOMP2010 Scenario 1, organized in conjunction with ICFHR 2010.

The offline signature verification system developed by Prof. Yanikoglu, Dr. Kholmatov and PhD student B. Yilmaz was the winner of the SIGCOMP2011 - Chinese Signature Verification Task in one of the two tasks (Chinese signatures), organized in conjunction with ICDAR 2011.

The online signature verification system developed by Prof. Yanikoglu and Dr. Kholmatov got the lowest errors in ESRA2011, on the mobile platform (DS3). This campaign was organized in conjunction with IJCB 2011.